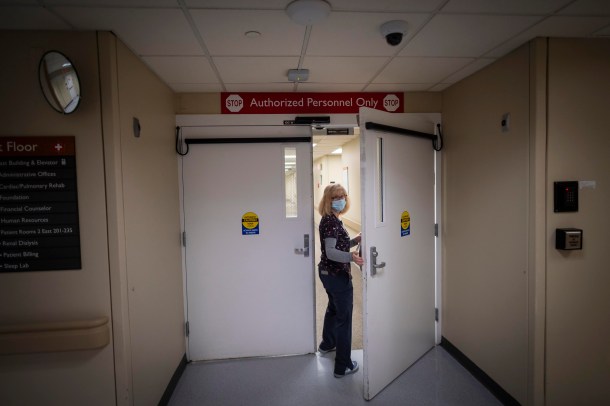 Covid wave this fall could derail next year’s hospital

Some months ago, when Vermont hospital executives began planning their budgets for the next fiscal year, the pandemic was in retreat. Cases were declining and so were hospitalizations and deaths.

Vaccines for younger children, toddlers and babies were on the horizon. The novel virus that radically altered every aspect of life in the Green Mountain State was slowly becoming the norm, not an emergency.

It was with that optimism that Stephen D. Majetich, chief financial officer at Southwestern Vermont Medical Center in Bennington, built the hospital’s budget proposal for fiscal year 2023. Executives built a budget to deal with the challenges they knew about — rising personnel costs and inflation.

Leaders at the 99-bed hospital in Bennington made very few allocations to handle another Covid-19 wave. Majetich is a money and numbers guy and none of the experts at the hospital could predict what the pandemic would do in the fall, he said. So he budgeted for little to no Covid-19 interruptions.

But in recent weeks, top experts at the U.S. Centers for Disease Control and Prevention and at the Vermont Department of Health have said that new, more contagious versions of the Omicron variant could sicken 30% of Americans, as many as 100 million, this winter. A wave that big could have significant implications for hospitals — and their finances.

“When (hospitals) construct their budgets, they use all the information they have available to project what they’ll need next year,” said Michael Del Trecco, interim president of the Vermont Association of Hospitals and Health Systems. “When you throw Covid into anything, let’s face it, everything is really fluid and it’s very hard to predict.”

The Bennington hospital is not alone in building a no-surge assumption into its budget. Officials at North Country Hospital in rural Orleans County told Green Mountain Care Board regulators that Covid-19 “does not have” direct effects on their budget proposal for fiscal year 2023 beyond the lasting financial implications of previous coronavirus waves.

Wendy Franklin, a North Country Hospital spokesperson, said on Thursday the hospital “isn’t planning for a significant Covid surge” and instead is focusing on “stabilizing” and investing in infrastructure.

Other hospitals, including Brattleboro Memorial, took a more precautionary approach and built Covid-19 response into their budgets, according to their submissions. Hospital spokesperson Gina Pattison said on Thursday that while the hospital budgeted for some Covid response, a surge that’s large enough to “significantly impact staffing, force the cancellation of elective procedures and require closure of our operating rooms would adversely impact” hospital finances, requiring “relief funds of some kind.”

Executives at the 61-bed hospital built in expenses such as expanding the infection prevention program, continuing to fund screening personnel and maintaining a seven-bed negative pressure unit for Covid-19 patients at the hospital.

At Southwestern, inflation and staffing costs were largely responsible for increasing estimated operating costs by about $15 million, an 8.5% increase, for fiscal year 2023. Hospital leaders prepared to ask the Green Mountain Care Board to approve a 9.5% increase in charges to commercial insurers and their enrollees, which would amount to $8.2 million.

Brattleboro Memorial is asking for a 14.9% rate hike, roughly $32 million.

North Country is asking for a 12% increase, amounting to an additional $8.6 million in charges.

If regulators approve these increases in full, Vermonters with commercial insurance could face rising premiums next year.

For now, it appears that hospitals would have to ride out a potential surge on their own, which makes this year’s budget review with the Green Mountain Care Board especially important.

Sen. Ginny Lyons, D-Chittenden, who heads the Senate Health and Welfare Committee, said it would be hard to offer state aid to hospitals unless Vermont gets additional federal support.

“I am very concerned that another surge will overwhelm (small hospitals),” Lyons said. “But at the same time, we have so many outstanding needs in our state, it’s gonna be really tough to find general fund dollars. It really will be.”

If the CDC’s projections hold true in Vermont, hospitals could contend with a wave of mild infections that sideline health care workers and worsen personnel challenges at hospitals, as was the case last winter.

Those costly disruptions could push some hospitals in the state to the brink, according to Del Trecco.

“We are in a space of stabilization,” he said. “Every one of our hospitals and providers are challenged around workforce. Their Fiscal Year 22 projections are not favorable and moving into this 2023 budget cycle, the (Green Mountain Care Board’s) mindset has to be to stabilize this provider community.”

Sign up for our guide to the global coronavirus outbreak and its impact on Vermont, with latest developments delivered to your inbox.