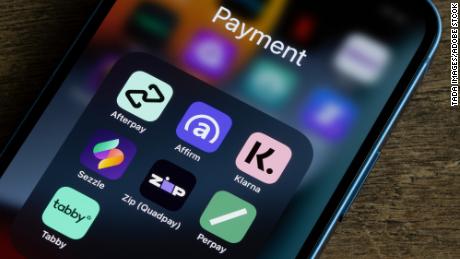 That’s a concern for economists and consumer advocates, who say the surge in the use of these services, coupled with a lack of transparency and little regulatory oversight, leaves them wondering just how much debt Americans are actually getting into.

While other household debt, such as credit card spending and auto loans, is gathered and tracked by the Federal Reserve, Buy Now, Pay Later (BNPL) data is not included because the financing is typically provided by non-bank sources and not yet reported in a comprehensive manner to credit bureaus.

“There’s no question there’s a big hole in our understanding of people’s financial situations, if you don’t include Buy Now, Pay Later,” said Matt Schulz, chief credit analyst for LendingTree. “And that’s a problem for credit scoring companies, credit bureaus and for lenders.”

From Affirm and Apple to PayPal and Zip, BNPL transactions are currently estimated to be at least $100 billion annually — a figure that analysts say could skyrocket to between $1 trillion to $4 trillion within a few years.

These types of services split a purchase into four or more installment payments to be paid over a period of few weeks or months. Customers can open a new account for each transaction or they can keep one account for their purchases as long as they have made their payments on time. BNPL accounts are typically offered with zero or minimal interest, and often come without a hard credit check.

To make money, the BNPL providers charge merchants between 1.5% to 7% of the transaction price, according to Kansas City Federal Reserve research. For some retailers, the costs are worth it, according to research from RBC Capital Markets, which showed online BNPL offerings boosted average ticket sales by 30% to 50% and increase the share of customers who ultimately made a purchase.
Despite its rapid growth, BNPL has raised red flags for economists, regulators and attorneys general. They’ve cautioned that because the services are not regulated as credit products, it has resulted in a Wild West-style market with varying terms and conditions and few checks and balances.

One significant downside is the risk of getting into debt fairly easily without realizing it, said Terri R. Bradford, a research specialist in payment systems for the Kansas City Federal Reserve.

The installment process makes it seem like someone is paying practically nothing for the goods or service they’re acquiring, she said.

“So the possibility is that you could, in your mind, think of everything that you’re buying in those four installments and, as a result, take on more debt than you would if you had to pay for them in full each and every time,” she said.

“The opportunity to stack your debt by using multiple Buy Now, Pay Later loans through multiple service providers is one of the biggest risks I see,” she added.

The three major credit bureaus have said they’ll start including BNPL activity on credit reports but they still need to rely on the providers for that information. Currently, some BNPL providers report when payments have been missed or in instances when plans have been paid off.

The Consumer Financial Protection Bureau opened an inquiry into BNPL and has expressed concerns about unclear terms, potential data harvesting, and the lack of other protections. The agency has been collecting information from BNPL providers and expects to publish its findings later this year.
However, the fear is that any potential fixes may not come quickly enough, said Marshall Lux, a Harvard Kennedy School research fellow who authored a recent study on Buy Now, Pay Later. These easy-to-use options are exploding just as people’s financial situations are worsening — creating a perfect storm that will put some of the most vulnerable Americans at risk, he said.

“With everything going on in the economy, this is not getting the attention this deserves,” he said. “Meanwhile, young people and the underbanked are being hurt badly, potentially ruining their credit for years to come.”

Typical BNPL consumers are younger — primarily Gen Zers and Millennials — and have credit histories considered to be subprime, Lux noted, citing research from TransUnion. They gravitate toward the services to avoid credit card interest but also to make purchases that don’t fit in their budget, according to Lux and the TransUnion survey.

The biggest red flag to Lux, a former chief risk officer for Chase, is what people are buying with these services and how customers can create “a revolving cycle of more and more debt.”

Means to an end

BNPL providers say they view their offerings as a safer and more sustainable option to traditional lines of credit.

“The product and the business, ultimately, is entirely built around the premise of the consumers’ long-term success and their ability to repay,” said Libor Michalek, president of technology, risk and operations at Affirm. “And if they’re not able to, that is where we share in the negative outcome.”

In a statement emailed in response to questions from CNN Business, a Klarna spokesperson wrote:

“Our interest-free products are designed to keep people out of debt. We conduct strict eligibility checks on each purchase, constantly reassess our lending criteria and spending limits, and restrict the use of our services until missed payments are fulfilled.”

Some consumers are using BNPL services with the hope of trying to stick to a budget or balancing out their finances month-to-month, said Charlotte Principato, financial services analyst for Morning Consult.

“What it signals to me is this is a means to an end,” she said. “It’s a considered choice about how to make money go a little further and still achieve the goals that you want and still get the things that you feel like you need.”

That’s especially true for the plurality of Americans who don’t have a steady paycheck month to month, she said.

“They have to work with imperfect data about what their paycheck’s going to be every month and still manage to meet what are rather fixed expenses and still make the discretionary purchases that everyone should be allowed to make,” she said.

For people like Linda Ramirez, the historically high level of inflation has meant there’s no wiggle room left for even the basics.

The single mother, who lives in a small South Texas town, has a 90-minute commute each day. At home, she has three growing adolescents.

To help make her budget stretch, she uses BNPL for discretionary purchases and for some necessities as well, including a recent $400 grocery bill.

For Ramirez, spreading out the cost via a Buy Now Pay Later app was a better alternative to putting the tab on a credit card, drawing a loan or forgoing payment on a utility bill. If all payments are made on time, most BNPL services don’t charge interest or late fees.

“I don’t want to do this forever, but it’s good to know that if I ever find myself in a rut in the future, then I can always use this again,” she said.

Correction: An earlier version of this article misstated estimates for the size of the BNPL industry. Transactions were projected to be at least $100 billion in 2021.